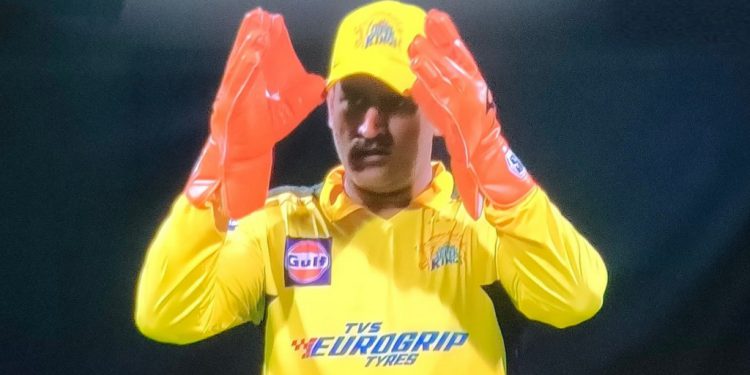 Former India cricketer MS Dhoni is still an active player in the Indian Premier League (IPL). Dhoni resigned from the captaincy before the 2022 season, passing on the baton to Ravindra Jadeja, but will continue to play as a wicketkeeper-batter.

The tournament opener between Chennai Super Kings and Kolkata Knight Riders (KKR) saw Dhoni finding back his Midas touch as a typical MS-innings took the team’s total to 131 runs. The 40-year-old smashed an IPL fifty after two years but it went in vain as KKR breezed past the target in the 19th over.

As CSK took the field in the second innings of the match, it was Dhoni’s wicket-keeping gloves that caught the attention of many. Instead of the camouflage ones, ‘Thala’ donned the orange-coloured gloves, which he used to prefer in the early days of his international career.

With Dhoni on the back nine of his career, this could be a hint that he has made up his mind and IPL 2022 will be his last season. Although there is no confirmation regarding this, Dhoni is known to shock the cricketing fraternity through his announcements.

Meanwhile, CSK gave their campaign a poor start, suffering a heavy defeat at the hands of KKR. No batter barring, Dhoni fared well as the side could register mere 131 runs in 20 overs.

KKR comfortably marched towards the target as their opener Ajinkya Rahane scored 44 runs off 34 deliveries. He was well aided by the middle-order batters as KKR achieved the target in the penultimate over of their innings.

Dhoni will now be seen in action on March 31 as Chennai Super Kings will lock horns with Lucknow Super Giants at Brabourne Stadium, Mumbai.