Bangladesh set to play two T20Is in the UAE in order to enhance their build-up for the T20 World Cup. 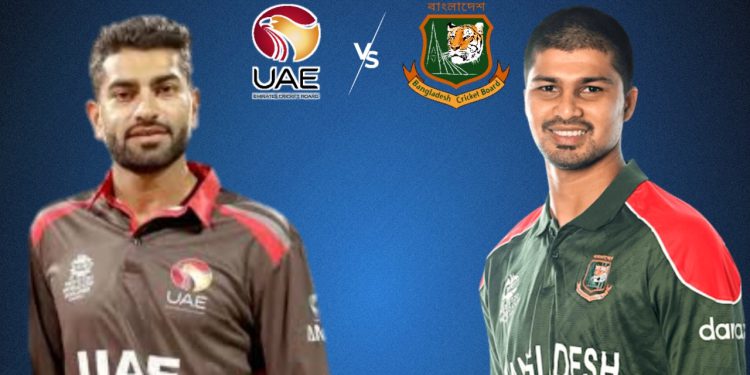 Bangladesh Cricket Team will be playing two T20Is against the UAE in order to add to their preparations for the upcoming T20 World Cup. Before Bangladesh leaves for New Zealand to play a Tri-series with Pakistan and the hosts, they will be touring the UAE where the two games will be played on the 25th and 27th of September. Both the matches will be played at the Dubai International Cricket Stadium. Find ahead, where you can watch the Live Telecast of the UAE vs BAN T20Is, in India.

Besides playing Two T20Is, the Bangladesh side will also be completing a training camp in UAE which couldn’t be completed back home. Due to persistent rains in the country, the Bangladesh Cricket Board had to shift it to the UAE.

Bangladesh has already qualified for the T20 World Cup 2022 and is placed with India, Pakistan, and South Africa in Group 2. The Shakib Al Hasan-led side will be kicking off their World Cup campaign on the 24th of October against the Group A runner-up from the first stage. UAE, on the other hand, will be competing in the Preliminary stage in order to enter the Super 12s. The side is placed in Group A with Namibia, Sri Lanka, and the Netherlands. The top two sides of both groups, after the end of the Preliminary Stage, will be entering the Super 12 stage.

No TV channel in India will be broadcasting the UAE vs Bangladesh T20Is Live in India. However, cricket enthusiasts in India can enjoy the Live Streaming of the matches online.

The Live Streaming of the UAE vs BAN T20I series will be provided by MX Player and Ullu apps in India. You can download both apps from Google Play Store and App Store. MX Player is streaming a Cricket series for the first time and pre-match analysis, match break discussions, post-match presentations, and player interviews will be there. While the live telecast of UAE vs BAN T20 series won’t be available on any TV channel in India.

Also Read: ‘I can’t tell, I am an opener or a finisher’ – Sanju Samson opens up on the challenge to find a spot in Team India