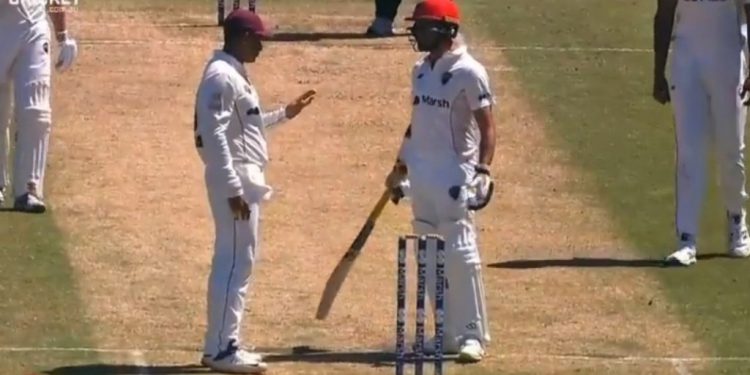 The Sheffield Shield match between South Australia and Queensland sparked a controversy. Redbacks batsman Jake Weatherald was involved in an incident that can be termed as a ‘blot’ on the gentleman’s game.

Before the ninth over began, Weatherald was chatting with his opening partner Henry Hunt during the change of ends. After the end of the conversation, Weatherald noticed a helmet placed on the batting crease, which was kept there by Matt Renshaw.

Weatherald did not like the placement of the helmet and angrily kicked it a few metres away. This did not go down well with the Queensland skipper Usman Khawaja, who momentarily confronted the batsman for his bizarre actions.

The two players were then seen exchanging a few words as umpires interrupted the scene and warned Weatherald for his strange actions. It is still unclear why the helmet was placed there. However, the on-air commentators mentioned that the fielders were playing around with the helmet.

Bizarre things on a cricket field:
Matt Renshaw (QLD) carried the helmet from one end to other and kept it right on the batting crease on batters guard.

Queensland registered an eight-wicket win over SA in Sheffield Shield

Asked to follow-on, the side led by Travis Head put on an improved show in their second innings. The captain led from the front as his ton pushed his side to a total of 284 runs. Queensland needed 88 runs to win and they did so comfortably as they won the match by eight wickets.