Kumar Dharmasena almost turns a fielder for Sri Lanka as he attempts a catch off Alex Carey's bat. 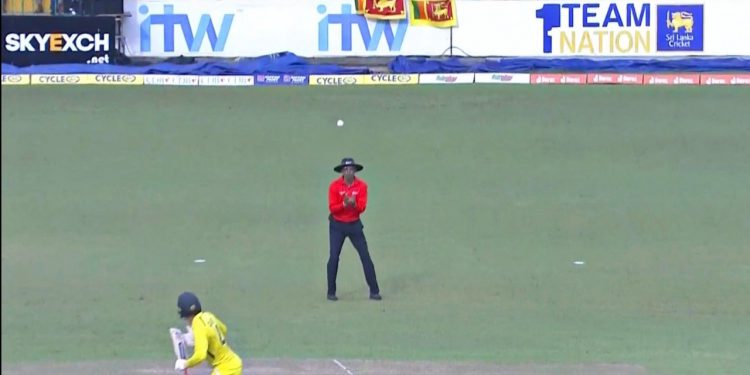 The third ODI of the 5-match SL vs AUS ODI series saw a funny incident happening where the on-field umpire, Kumar Dharmasena, tried to take a catch off an Australian batter. The pictures of the incident were captured and are going viral on social media. The Twitter handle of Cricket Australia as well shared a picture of the incident.

After losing the first ODI, the Sri Lankan side has taken a 2-1 lead by winning two consecutive matches. The third ODI of the 5-match ODI series between Australia and Sri Lanka was won comfortably by the hosts. Pathum Nissanka scored a brilliant hundred in the run-chase for Sri Lanka and made sure that his side was never on the back foot. Talking about the Australian innings where the visitors posted a good-looking total of 291 runs, Travis Head top-scored as he scored a 65-ball 70*.

During the 1st innings of the 3rd ODI, while the Australian side was batting, Alex Carey lofted a shot towards the square leg where the umpire Kumar Dharmasena was standing. As soon as the Dharmasena realized that the ball is coming toward him, he instinctively brought his hands together as if he was going for the catch. However, as soon as he realized that it isn’t his job to catch the ball, he got away from the line of the ball.

Kumar Dharmasena is a former Srilankan cricketer and was a member of the 1996 world cup winning team. The 51-year-old is interestingly the only person who has been a part of an ICC World Cup Final both as a player and an umpire. The pictures of Dharmasena going for the catch have caught a lot of attention on social media platforms. Cricket Australia posted a picture of the incident and thanked Dharmasena on a funnier note for not taking the catch.

Kumar Dharmasena going for a catch in SL vs Aus Odi match pic.twitter.com/DYyxn6kEsy

Catch! Umpire Kumar Dharmasena looks like he wants to get into the action…

Netizens went on to post their reactions regarding the incident on various social media platforms. A Twitter user wrote that it’d have been more fun if Dharmasena had completed the catch. While one wrote that it was good that Dharmasena timely remembered it was not his job to catch the ball.