Malik has been troubling the batsmen with his great speeds in the ongoing season of the Indian Premier League. 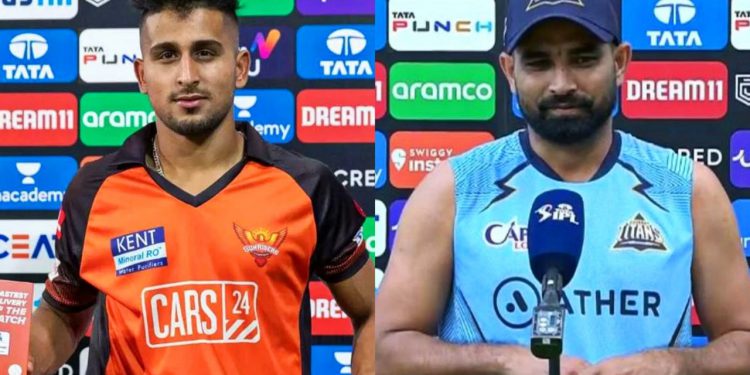 Umran Malik emerged as one of the fastest bowlers in the tournament when he made his debut for Sunrisers Hyderabad in IPL 2021. The youngster from Jammu has been clocking great speed in the ongoing edition of the Indian Premier League as well. Though the SRH bowler has extraordinary pace, many believe he needs to work on his line and length. Gujarat Titans’ pace spearhead Mohammed Shami recently added his two cents on Umran Malik.

The 22-year-old speedster has gotten better if we compare his performance in the previous year IPL. While he had pace, his line and length were under the scanner in the previous year’s IPL. In the 2022 season, the bowler became a better version of himself and has troubled the batsmen, more often than not. He even bowled the fastest ball of this season at 157kmph. Mohammed Shami, who is providing his services for GT, has shared his opinion on Umran Malik.

Mohammed Shami, during an interaction with select media, talked in length about fast bowling. He talked on how it is important for a bowler to be accurate and how having just raw pace is not enough. Shami himself is a renowned name in Indian cricket and is known for his accuracy across formats. He has been churning out wickets for Gujarat this season and has been an integral part of the GT Playing XI.

“Umran Malik has the pace, but personally, if you take my opinion, I am not such a big fan of pace. If you are bowling at 140 but you can move the ball both ways, it is enough for any batter. He has the pace but I think he will take a little more time to mature because with pace, bowlers need to work on accuracy as well,” said Mohammed Shami talking to media.

ALSO READ: ‘What is the use of generator?’ – Virender Sehwag questions BCCI after the unavailability of DRS in CSK vs MI match

As for his stats, Umran Malik has claimed 15 wickets in 11 matches which includes a five-wicket haul against Gujarat Titans. The Indian fans would definitely want Malik to keep getting batter so he can represent India one day and trouble the opponent batsmen. His IPL franchise SRH are still in the race to playoffs with 10 points in 11 matches.