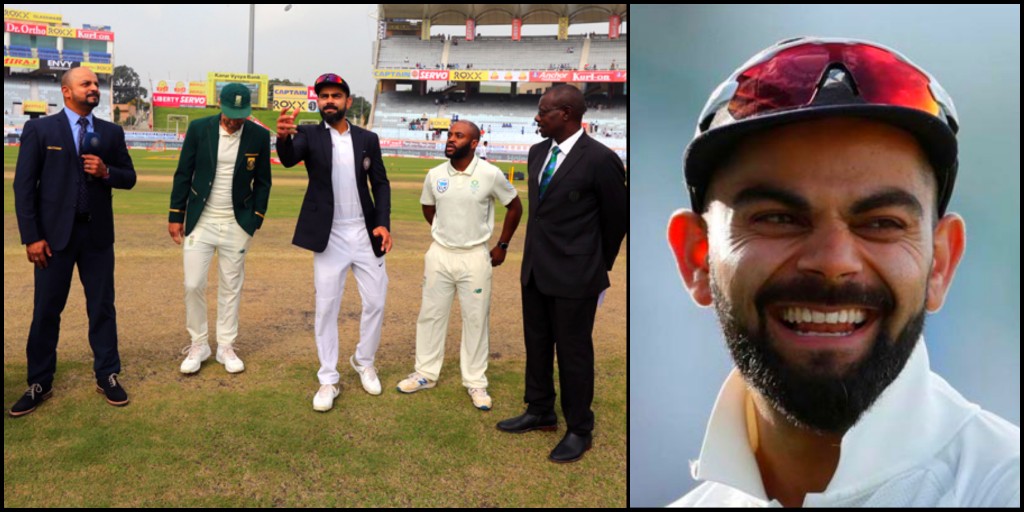 India and South Africa are currently playing the final test match of their 2019 test series. South Africa has left nothing to win except this test as they have already lost the series after getting defeat in the first two tests. Before the 3rd test match, Faf du Plessis had said that toss has been a big factor in test matches but his record at toss has not been great. He had lost both tosses in the first two tests against Virat Kohli who is also known as for his unluck at winning the toss.

Virat Kohli spun the coin and Bavuma called ‘heads’. However, toss presenter Murali Kartik committed a blunder concerning what Bavuma called. He thought he called ‘tails’. Although, both the captains handle the situation as they knew India have won the toss. Indian skipper patted on Bavuma’s back wearing a wry smile. But Virat Kohli couldn’t stop his laugh seeing South Africa losing the toss even after using a proxy captain.

Interestingly, the last time when a South African captain (Hashim Amla) won a toss in a test match in Asia was way back in 2015 against Bangladesh. On the other hand, Virat Kohli has been very lucky with the toss in this series. He won all three tosses and chose to bat first. After electing to bat, India has done well in first innings of all three tests.

WATCH VIDEO: Rohit Sharma Gets Angry On Rain, Replied With A Six

In the first innings of the first test, Rohit and Agarwal scored a century and double century respectively. While in 2nd test Virat reached his career-best 254 which helped India to put a mammoth 600-plus total. In the third test, Rohit Sharma has continued the process as he scored his third ton in this series. Currently in this test, at the end of the first day, India is on 224 at the loss of 3 wickets. Rohit Sharma and Ajinkya Rahane are in great touch and currently playing on 117 and 83 respectively.