After Bairstow's counter-attack, team India came back into the game with their batting line-up piling up the runs in the second inning. 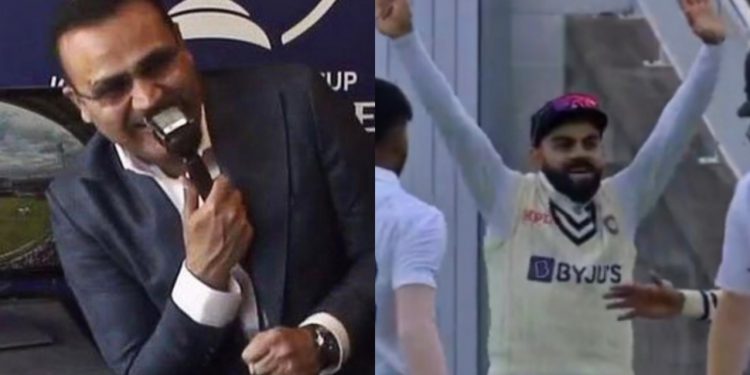 The third day of the rescheduled 5th Test between England and India was an eventful one. The match swung like a pendulum but it was India who ended the day on a high. The third day also witnessed a heated exchange between Jonny Bairstow and Virat Kohli. While the English team was struggling, Virat Kohli danced as a celebration of a wicket and Virender Sehwag faces fans’ backlash as he calls Kohli ‘chhamiya’ on air.

Virat Kohli was quite animated on the field on the third day as he has always been on the ground. Kohli loves to talk to players and engage the crowd while he is on the field and the same was seen yesterday. The right-handed batsman got into a verbal spat with Bairstow who went on to score a century for his team. Apart from this, Kohli was seen shaking his legs after Sam Billings went back to pavilion. Now, Virender Sehwag faces fans’ backlash as he commented on Kohli’s little dance and called him ‘chhamiya’.

The comment for which Virender Sehwag faces fans’ backlash came in the 60th over of the England inning when Mohammed Siraj got an important wicket of Sam Billings. After team India bowlers ripped through the English middle-order, Billings tried to make partnerships with the tail, however Siraj proved too good for the batsman and he was bowled as the ball took the inside edge and rattled the stumps.

Virat Kohli shook his legs in celebration of the ninth wicket and the Hindi commentator Virender Sehwag faces fans’ backlash for calling him a ‘chhamiya’. Sehwag was in the commentary box with Mohammed Kaif when he made the comment which has brought him the fury of fans. As for the match, team India has their noses ahead after the end of third day’s play.

Team India lost an early wicket of Shubman Gill in their second inning but Cheteshwar Pujara held one end together and contributed to the team’s cause with a half-century. On the other hand, Rishabh Pant has supported the opener really well so far as he is unbeaten on 30 and will resume his inning on Day 4. The Indian team has already got a 257-run lead with 7 wickets still in hand.