Aaryavir Sehwag is a right-handed batter who will not play for DDCA's junior team. 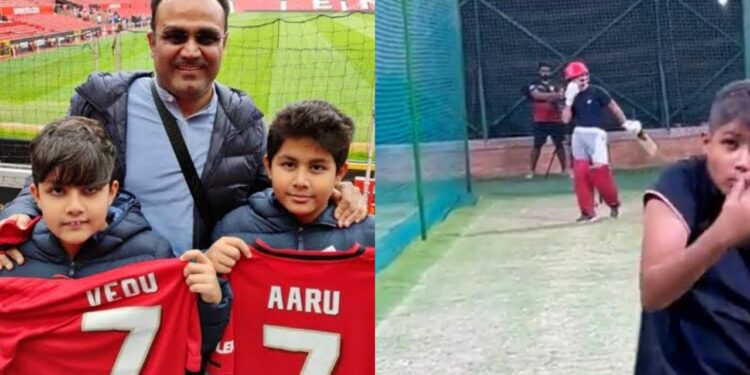 Team India’s former opener Virender Sehwag is considered as one of the most explosive batter globally.

Now, Aaryavir Sehwag, elder son of the former Indian opener has got selected in the Delhi team squad in the Under-16 Vijay Merchant Trophy organized by the BCCI.

Aaryavir Sehwag set to be seen on the cricket field

Virender Sehwag’s son Aaryavir Sehwag has now stepped into professional cricket and has been named in Delhi’s under-16 squad. The Delhi & District Cricket Association (DDCA) announced its squad ahead of the Under-16 Vijay Merchant Trophy and cricket fans were amazed to see the name of Aaryavir as he is the son of Virender Sehwag whom they’ve supported over years.

Delhi Men's under 16 Team for the match against Bihar in the Vijay Merchant Trophy. Delhi won the toss and elected to bat first. pic.twitter.com/KcwMwSS4yw

A video has gone viral on social media in which Aaryavir can be seen practicing his shots. Junior Sehwag showed some glimpses of his father’s style of batting as he didn’t defend a single delivery. The 15-year-old batter was also seen using his feet to reach to the pitch of the delivery in order to create some aggressive shots in the viral video.

Aaryavir Sehwag has posted some videos of his batting on his Instagram account and his aggressive approach can be clearly seen in all those videos. His batting stance too, is quite similar to senior Sehwag. The young batter can be seen flaunting all sorts of shots including cut, pull and hitting the off-spinner down the ground over his head.

Junior Sehwag is already getting some serious attention from the media and cricket fans. He has more than 11k followers on his Instagram account supporting the young batter to yield some great results just as his father. The viral video too has got more than 5k likes as fans are applauding Aaryavir’s batting style.

ALSO WATCH: Crowd ran after Hasan Ali to beat him, the Pakistan cricketer fled the ground in time

The DDCA announced a 15-member squad for the Under-16 Vijay Merchant Trophy and named Arnav Bagga as the captain of the side. Aaryavir got selected in the 15-member squad but couldn’t find his place in the opening game against Bihar and it seems like the 15-year-old batter needs to wait a bit more before cricket fans can see him playing for the Delhi side.