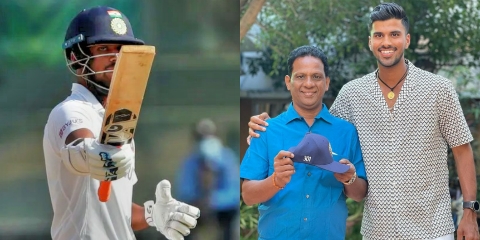 On Monday, Washington Sundar registered the highest score of his Test career. The southpaw scored an unbeaten 85 and helped India reach 335 in the first innings. As the Tamil Nadu all-rounder has become the talk of the town, the unique name of Washington Sundar has made fans wonder. Curious fans want to know the real reason behind the Washington Sundar name. There is an interesting story behind the unusual name of the Chennai-born cricketer.

The 21-year old’s father revealed he named his son after his godfather PD Washington. “I am a Hindu and come from a very humble family. Two streets away from my home in Triplicane lived an ex-army man called PD Washington. Washington was extremely fond of cricket and would come to watch us play at the Marina ground. He took a liking for my game,” tells M Sundar.

Cricketer’s father further revealed that he was poor and couldn’t afford uniforms, books and fees for his study. However, P. D. helped him financially and encouraged him. The ex-army man was a hero for Washington Sundar’s father. In 1999, just after PD passed away, M Sundar’s first child was born.

M Sundar’s wife had a difficult delivery but the baby survived. He further added “As per the Hindu custom, I whispered a God’s name, ‘Srinivasan,’ in his ear. But I decided to name him Washington in memory of the man who had done so much for me,”

Meanwhile, Washington Sundar scored his highest test score at his home ground Chennai. He took 138 balls to reach 85 with the help of 12 fours and 2 sixes. This is the second half-century of southpaw in his second test. Earlier, he had scored a match-saving knock against Australia in the Brisbane Test. The 21-year old possesses good batting abilities. The left-hander has scored a first-class hundred for Tamil Nadu. Sundar had replaced an injured Ravindra Jadeja in the test team. So far, he has scored 169 runs and has picked 4 wickets in his Test career.