The former cricketer came up with an interesting stat to shut the Aussie broadcaster. 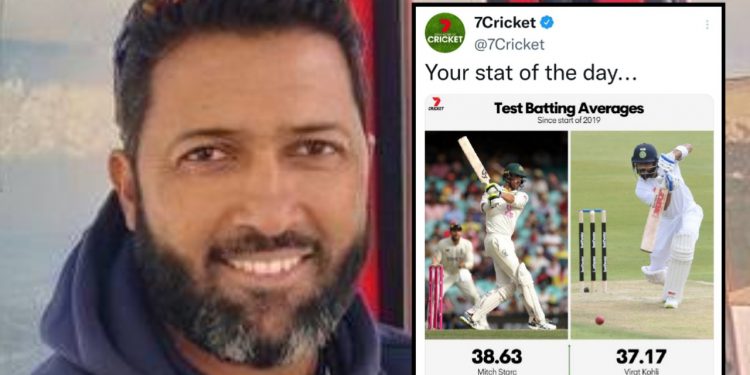 Last two years haven’t been as fruitful for Virat Kohli as his fans and he himself would have liked to. The wait for Kohli’s next century has been on for two years now. Though the star batsman has scored half-centuries during this period, there was no 3-figure score to his name. Comparing Kohli’s Test average with Aussie bowler Mitchell Starc, 7Cricket posted a tweet on their handle and got savagely trolled by Wasim Jaffer.

Wasim Jaffer is one man who doesn’t believe in mincing his words and always comes up with hilarious comebacks. The fans admire the former cricketer for his quick-witted replies and comebacks. He is quite active on social media and his Tweets tickle the funny bones of his followers. Recently, Aussie broadcaster 7Cricket compared the Test average of Kohli and Starc, to which Wasim Jaffer came up with an apt reply.

In the picture posted by 7Cricket, Starc and Kohli’s Test average sine 2019 can be seen where Starc averages 38.63 while Kohli averages 37.17. This comparison between the two was surely ridiculous as both the players can’t be seen in the same light. Jaffer trolled the Aussie broadcaster by coming up with an interesting stat. He tweeted the ODI averages of Indian pace bowler Navdeep Saini and Steve Smith. While Saini averages 53.5, Smith lags behind with an average of 43.34.

Wasim Jaffer definitely knows how to shut the trolls down as he did with his reply to 7Cricket. Virat Kohli was out of the second Test due to an upper back spasm, but he will be back in the third and final Test of the series.

WATCH VIDEO: Ben Stokes & Jonny Bairstow lose their cool on a fan for calling them ‘fat’

Kohli got good starts in the first match, however he couldn’t convert them into a big score. He will be looking forward to get a big score in the third match for sure.