Watch: Ben Stokes & Jonny Bairstow lose their cool on a fan for calling them ‘fat’

Ben Stokes and Jonny Bairstow gets engaged in the war of words with a fan, who body-shamed him. 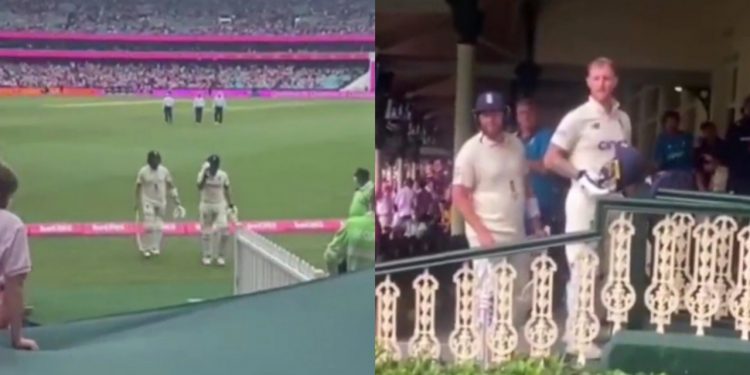 England’s horrendous show in the ongoing Ashes has garnered them a lot of criticism. The spectators in the SCG did not spare them either as an Aussie fan in the crowd was heard body-shaming two English cricketers, Ben Stokes and Jonny Bairstow.

Losing early wickets on Day 3 of the fourth Ashes Test, England were again reduced to shambles, reeling at 36/4. This is when Bairstow joined hands with Stokes, who was already struggling with a side-injury. Consolidating the innings, the duo survived the morning session. The second session of the day also belonged to England as Bairstow along with Stokes stitched a handy partnership.

As the players were going back to the dressing room for the tea, they received appreciation from a knowledgeable Sydney crowd. However, a bloke sitting in the Noble Stand of the SCG abused the Englishmen.

“Stokes, you’re fat,” the fan was heard saying. “Take your jumper off, Bairstow, lose some weight Bairstow,” the England batsman was body-shamed. Stokes paid no heed to the abuse directed towards him but stopped at the stairs in support of his teammate.

Bairstow fired back at the fan and asked him to walk away. “Pal, That’s right. Just turn around and walk away. Weak as piss,” Bairstow responded back to the fan.

England’s director Ashley Giles stood in support of Bairstow as he patted the batsman on the back as the duo entered the dressing room to have tea.

Watch the video of the incident:

Police took charge of the whole situation and ejected three men from the ground. Bairstow narrated what transpired after the day’s play. “It was just a bit of bad-mouthing from the crowd, it’s not the greatest, and it’s not needed,” Bairstow said.

“It’d have been nicer if we were there giving it when we walked off at the end, wouldn’t it? Unfortunately, they weren’t there at the end, they missed the end of a fantastic day of Test cricket,” Bairstow added.