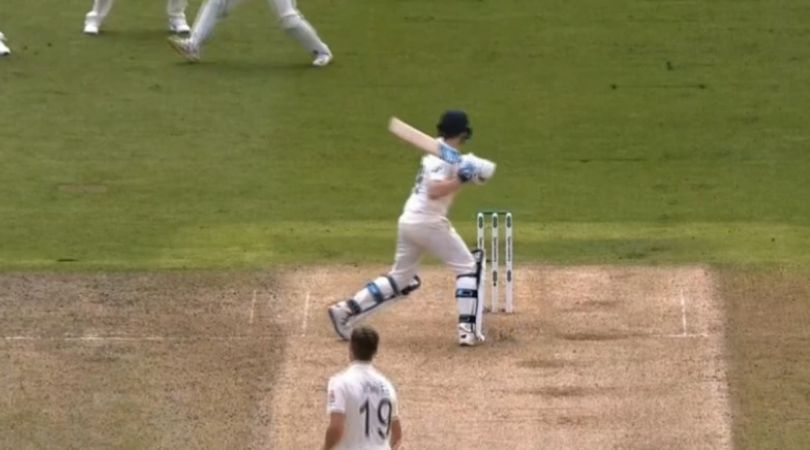 In the on going Ashes 2019, Australian batsman Steve Smith was seen leaving numerous ball in funny manner. Steve Smith always tries to do something new in the cricket whether it is stance or leaving the ball. Currently, Australia is playing second test match at Lord’s cricket ground against England. Meanwhile, on the third day of 2nd Test Australian Steve Smith has seen doing Extraordinary ‘Leaving The Ball’ Style.

However, this was looking so funny to see and later on the video of the incident got viral on social media platforms. Since Smith’s ban in International Cricket, he is playing his first Test series. And he had helped his team with century to won the first Test Match of the on going series.

Earlier in the second Test match after winning the toss Australian captain Tim Paine had decided to start with bowling. However, England team could manage to score 258 runs in the first innings. From English batting unit Rory Burns and Jonny Bairstow has scored two fifties of the innings. And Australian Pat Cummins, Josh Hazlewood and Nathan Lyon has took 3 wickets each in the first innings.

At the start of Day 3 Australian were 30/1 and after that they had lost three wickets in the seventh session of the Test Match. Smith came in to bat at number 4, was looking strong against England pace attack. However, he has applied some extra tricks to accomplish the fast attack.

Currently, Steve Smith is batting for the score of 13 in 40 balls. Meanwhile, the rain was started in the 37th over of the Australian innings and later on 3rd Day called off.

Steve Smith extraordinary ‘leaving the ball’ style has got viral on the social media platforms. In the video we can see how in funniest manner he is leaving the ball. However, he did this for plenty of times to overcome danger of England Pace Attack.

Watch Video: Most Bizarre Run Out In The History Of Cricket, Have You Seen Before

Steve Smith leaving the ball is the most entertaining thing I’ve seen in a long time 😂😂👏🏽 #Ashes pic.twitter.com/nuuyRrDpaJ