A series of tremors that lasted for twenty whole seconds was captured on camera. 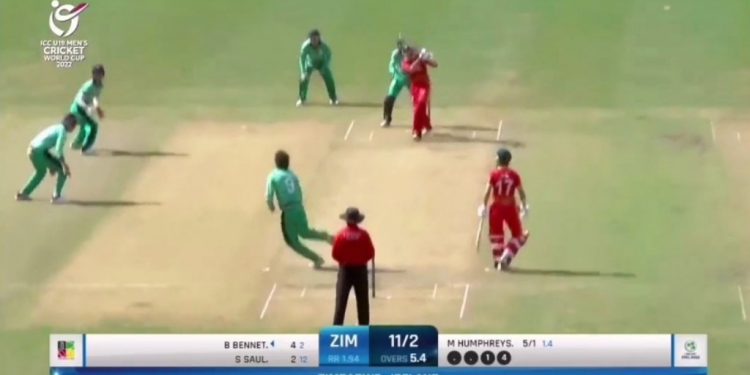 A screengrab from ZIM vs IRE U19 match (Source - ICC)

The ongoing edition of the ICC U19 World Cup has been rocked by enough action already. Except this time, the ‘rocking’ was quite literal; as a 5.2 Richter scale earthquake rocked the Port of Spain and caused real-time tremors during the Ireland vs Zimbabwe game at Trinidad.

During the sixth over of Zimbabwe’s innings, a series of tremors that lasted for twenty whole seconds was captured on camera. But it didn’t seem as though the players had been able to register the phenomenon. In fact, Irish spinner Matthew Humphreys kept bowling right through the whole process, and his batting counterpart, Brian Bennett, even tried to play a shot towards mid-off.

Earthquake at Queen's Park Oval during U19 World Cup match between @cricketireland and @ZimCricketv! Ground shook for approximately 20 seconds during sixth over of play. @CricketBadge and @NikUttam just roll with it like a duck to water! pic.twitter.com/kiWCzhewro

“Felt like a train passing by”- ICC commentators during the earthquake

Andrew Leonard and Nikhil Uttamchandani, the two ICC commentators covering the match, were quick to realise what was happening around them. “I believe we’re having an earthquake here at the box. It honestly just feels like a train passing by”, Andrew joked.

Nikhil went one better and quizzed his colleague on what was the protocol during such unforeseen events. “I’m not sure either, I think when I was very young, there was an earthquake in Barbados. Just felt like a bus passing by. But what are the players supposed to do?”

Thankfully, none of the players or personnel involved were hurt during the event. Bennett, in fact, seemed particularly unfazed by the whole event and collected a boundary of the very next ball after the tremors had stopped.

ALSO READ: ‘Virat Kohli is a part of hype era’ – Sanjay Manjrekar excludes former India skipper from his list of most successful captains

Bennett was the top-scorer in Zimbabwe’s innings with 37-runs, as the men in red-and-gold folded for a paltry score of 166 in just 32 overs. Humphreys went on to bag 3 wickets, while young fast-bowler Muzamil Sherzad claimed a fifer. A couple of fine fifties from Jack Dickson and captain Tim Tector ensured that the men-in-green won the game without any hassle.