Watch: Hasan Ali bowls at an impossible speed of 219 Kmph

Hasan Ali made the headlines for his 219 kph delivery during 1st T20I between Pakistan and Bangladesh. 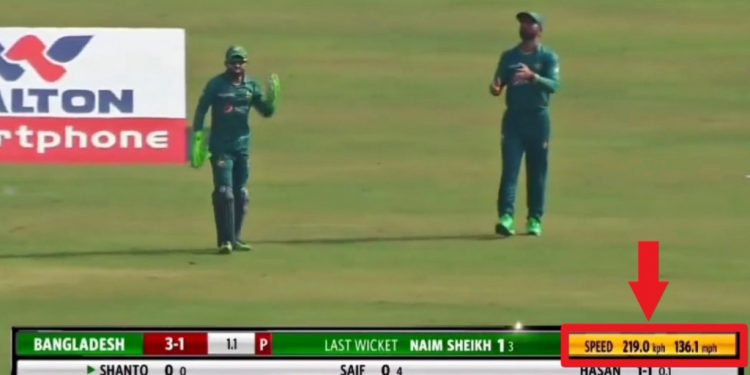 Post shaking the cricketing world by qualifying for 2021 T20 WC play-offs, Pakistan have a new task at hand. Currently, their cross-border neighbour Bangladesh is hosting them for a T20 international series. The 1st game of the 3-match long series was already played yesterday. Eventually bagged by Pakistan, the match was a complete nail-biter.

Did Hasan Ali actually clock 219kmph with the ball in hand?

Short answer? Yes and No. Let me get you the details. Bangladesh won the toss and chose to bat first. Hasan Ali, coming off an underwhelming T20 WC shared the new ball duties with Mohammed Nawaz. Handed the ball for the second over, Ali came out all guns blazing. Or so it seemed.

Apparently, the second delivery Hasan Ali bowled threw the cricketing world into a frenzy. And why wouldn’t it? It clocked 219kmph on speedometer, afterall. Ali’s delivery can be seen below.

Now, coming to the delivery itself, it was an off-stump lined full-length ball which angled away from left-handed Shanto’s push. However, it didn’t actually cross the batter at 219kmph. It was soon confirmed that a technical fault in the speedometer had resulted in Hasan Ali ‘seemingly’ clocking an impossible speed of 219kmph.

While Hasan may have suffered a cruel heart-break after knowing this, Shoaib Akhtar must be a happy man. Shoaib still holds the record for bowling the fastest delivery ever: 161.30 kmph at 2003 ODI World Cup.

After opting to bat 1st, Mahmudullah’s batting unit played right into Pakistan’s plans. Mahedi Hasan top-scored with his 20-ball-30 and if not from his late assault, Bangladesh would not have reached 127 for 7.

With the ball in hand, Bangladesh had Babar and his men down on their very knees for a majority of the match. At 16-over mark, Pakistan were 96 for six. However, Md. Nawaz and Shadab then showed their hitting abilities, snatching the win from Bangladesh’s jaws. Nonetheless, Hasan Ali was declared Player of The Match courtesy his brilliant spell of 3 for 22. Every true cricket fan would be heartened to see Ali redeem himself following his awful run in T20 WC 2021.