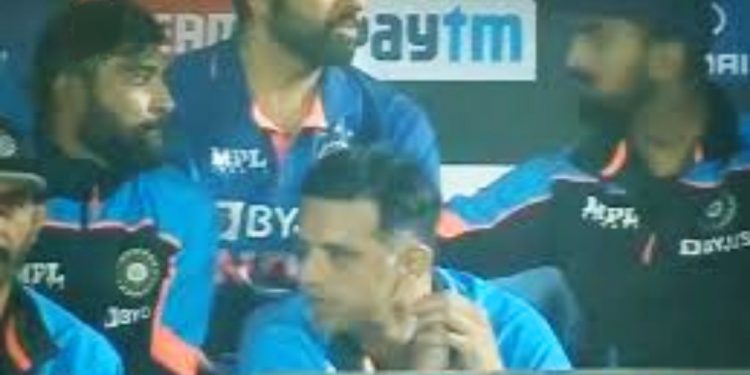 November 17 witnessed The Indian Team featuring against their newly made arch-nemesis New Zealand in what happened to be the 1st T20I of a three-match-long series between the two sides.

Black Caps were asked to bat first, and they managed to put 164 runs on the board. Nonetheless, The Men In Blue managed to come out trumps, in what turned out to be a close affair. However, there occured an incident during India’s chase which broke the internet. It had nothing to do with the chase itself.

During one point of the chase after Rohit Sharma had been dismissed, new head coach Rahul Dravid was seen discussing something with batting coach Vikram Rathour. Behind them sat the trioka of Rohit, Lokesh Rahul & Siraj, staring at something to their left.

Rahul soon looked at his opening partner Rohit Sharma, following which Rohit was caught hitting Mohammed Siraj to back of his head. The video-clip went super-viral pretty soon. It is attached below.

Netizens were left in confusion over what all went behind the incident, and some sensed bad-reps between Siraj and Sharma. However, such isn’t the case at all. From what the cameras captured, it was all in good spirit and meant for pure fun. Siraj himself laughed after coping the hit, ruling out any possible scope of foul-play.

Coming back to the match itself, SKY top-scored with a match-winning 64(40). Hitman Sharma helped him with a splendid 48. Eventually, it was Pant’s final-over boundary which sealed the match for The Men In Blue.

Earlier, Martin Guptill was at his absolute best and smoked a quick-fire 70 off just forty-two balls. Mark Chapman was happy playing the second fiddle. He anchored their inning with a sensible sixty-three. Ravi Ashwin was the pick of the indian bowlers: He took two crucial wickets while giving away just 23 runs off his four-over spell.