Will Young was given out LBW on R Ashwin's delivery. He decided to take the review but the request was declined as 15 seconds had already passed. 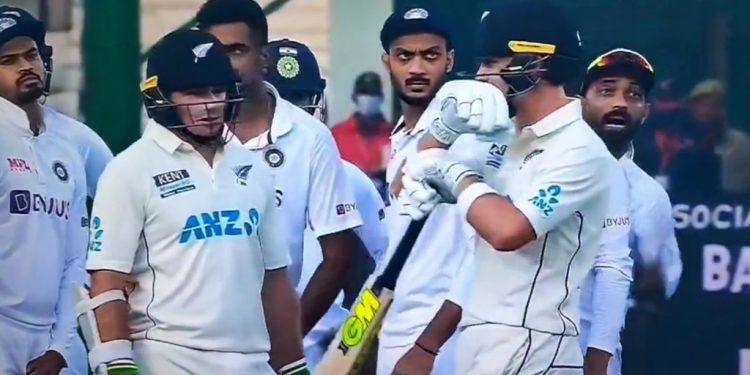 The first game of the two-match Test series between India and New Zealand is in for an exciting finish. After four days of riveting action, India is marginally ahead in the match but the Kiwis for sure are not down and out yet.

The Test match has produced exciting cricket with a few doses of excitement and drama filled in it. Day 4 was no different as it gave the fans and the teams the thrill of a rollercoaster ride. New Zealand started great but lost the plot as the day’s play came out to a close.

Despite losing early wickets, India’s middle and lower order rose to the occasion and gave the visitors the target of 284 runs. The task is humongous and it became even bigger as New Zealand lost their opener Will Young in the 3rd over of their innings.

In what can be termed as an unfortunate dismissal, Young got deceived by a turning delivery on Ravichandran Ashwin’s bowling, which eventually hit his front pad. After taking a second or two, the umpire decided to give the decision in the favour of the bowler.

After having a chat with his partner Tom Latham, Young decided to review the decision. However, the timer had already gone past 15 seconds and unfortunately, his review request was declined.

Later on, ball-tracking was shown and it became clear that the ball was missing the stumps. Had Young taken the review within 15 seconds, he would have been not-out and New Zealand probably would have ended the day without a loss of any wicket.

Currently, the score reads 4/1 with still 280 runs to chase. As the pitch is keeping low and slow, India has a great chance of clinching the match and gaining a 1-0 lead in the series.