Crowd teased the Indian opener for being in a rumoured relationship with Sara Tendulkar. 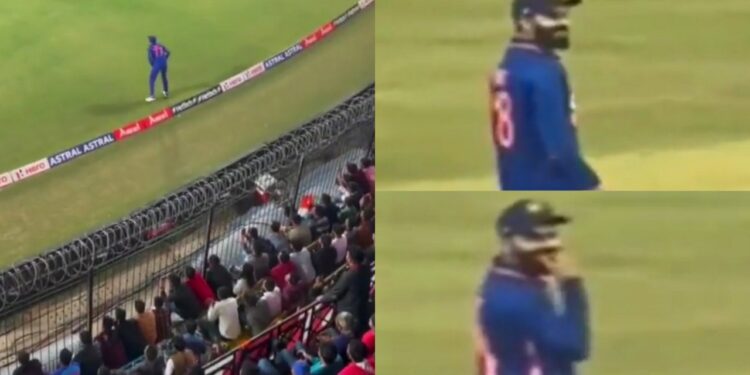 Shubman Gill has been scoring tons of runs in International cricket these days. But it’s not just Gills’s sublime form that keeps him in the spotlights of the fans and media. The 23-year-old is reportedly having an affair with the daughter of great Sachin Tendulkar.

Shubman Gills’s name has been associated with Sara Tendulkar for a long time now. The two are seen commenting on each other’s Instagram posts which has made fans think that they are dating secretly.

The rising star of India has broken many records in this series. He scored a double-century in the first game at Rajiv Gandhi Stadium then scored another classic ton in the third ODI at Holkar Stadium. He even got named man of the series for scoring 360 runs in the 3-match series.

During the third ODI when India was defending their total of 385 runs, Gill was fielding at deep square leg. The Indore crowd didn’t miss a chance to tease the young boy with the name of his rumored girlfriend Sara Tendulkar.

The thing which made the incident even funnier was Virat Kohli’s reaction to the crowd tease. The former Indian skipper happened to enjoy the moment when the crowd was chanting Sara’s name to tease Gill.

The crowd chanted “Humari Bhabhi kaisi ho? Sara Bhabhi jaisi ho!” while Gill was situated at deep square leg. Virat Kohli standing at the extra cover was loving every bit of the chants and he even gestured for the crowd to chant even louder.

ALSO WATCH: Rohit Sharma loses his cool on Shardul Thakur for not bowling according to the field in Indore ODI

The 23-year-old has impressed everyone with his consistency and class. Gill has been always a technically gifted player but the only thing that lacked in his game was consistency and the ability to play big innings. He ticked all the boxes in this series and has almost removed Shikhar Dhawan from the ODI team scene.