Watch: Rohit Sharma loses his cool on Shardul Thakur for not bowling according to the field

The pacer bowled a short pitched delivery and the skipper wasn't impressed as he wanted him to bowl at full length. 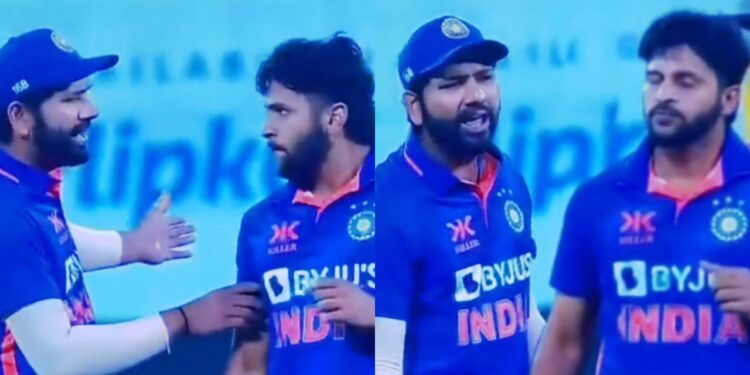 In the third ODI between India and New Zealand, a rare sight was caught on camera. Watch: Rohit Sharma loses his cool on Shardul Thakur for not bowling according to the field.

India wrapped up another series 3-0 at their home

The men in blue are in superb form in the One-day format just before the World Cup in the corner. Rohit Sharma and co whitewashed New Zealand. The victory became even sweeter for India as the Kiwis came to India just after defeating Pakistan in Pakistan.

After winning the first two ODIs of the series India put up another sublime batting show in the third ODI at Indore.

Shubhman Gill and Rohit Sharma displayed fireworks at the Holkar Stadium in the first innings. Both the openers end up scoring centuries which helped India reach yet another big score of 385 runs.

In reply, New Zealand again failed to handle the pressure of a big score. Opener Deven Conway did play an unbelievable knock of 130 runs at one end when the wickets were falling continuously. Conway’s brave effort wasn’t enough for Kiwis as they were bundled out on 295 in 41 overs.

During the second innings, a rare incident happened when Rohit was seen yelling at Shardul Thakur for not bowling according to the plan. Captain Rohit Sharma looked frustrated with Thakur as he bowled two back-to-back short deliveries which Conway belted for boundaries.

Rohit was telling Shardul to bowl straight and quickly rather than experimenting with slower balls and cutters. Although Shradul was already having two big wickets on his name in the same over before getting his last deliveries got hammered for four.

Everything ended well as Rohit and Shardul hugged and congratulated each other after the victory.

Just after the over in which Shardul got scolded by Rohit for not bowling according to the field, Shardul dismissed Glenn Philips on 5 runs. Rohit Sharma was absolutely delighted with the bowling effort of Shradul and he even gave him a tight hug.