Team India won the first contest quite easily as the Zimbabwe bowlers looked down and out against the Indian openers. 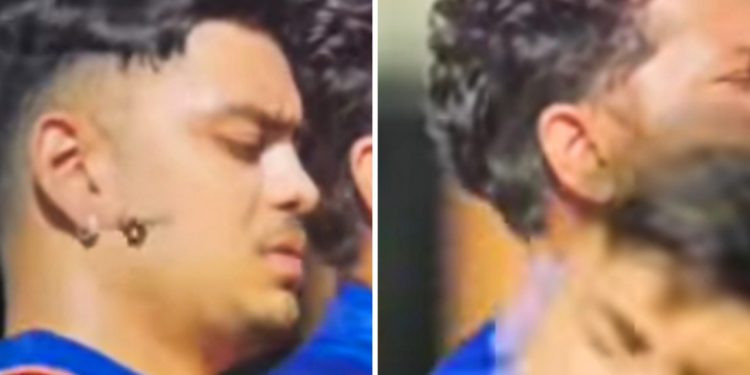 The Indian team took to the field today against Zimbabwe in the first game of the 3-match ODI series in Harare. All the biggies of the team are on rest while the youngsters along with only a few seasoned campaigners are battling it out on the field. Before the first game started, both the teams stood for the customary National Anthem after the toss where Ishan Kishan almost gets bitten by a bee.

Ishan Kishan almost gets bitten by a bee

The first encounter between India and Zimbabwe started on 12:45 IST where the Indian skipper for the tour KL Rahul opted to bowl first after winning the toss. It was after the toss that an amusing incident took place which involved Ishan Kishan almost getting bitten by a bee. The cricketer was singing the National Anthem when the bug flew at him which startled the cricketer.

Luckily, the bee didn’t do any harm to Ishan or anyone else and flew away. As for the match, Ishan Kishan was part of the Playing XI, but didn’t get an opportunity to bat, owing to the brilliant opening partnership between Shikhar Dhawan and Shubman Gill. Both the Indian openers helped the team to a victory without breaking a sweat. Both Dhawan and Gill were involved in a record-breaking 192-run partnership.

Earlier, the Indian bowlers were clinical in their approach as they kept taking Zimbabwe wickets at regular intervals. Except for the 9th wicket partnership of 70 runs between Brad Evans and Richard Ngarava, the hosts never looked settled and could only post a below-par total of 189. With the victory, team India has won 13 consecutive games against Zimbabwe which is the most number of consecutive wins by the Indian team against an opponent.

Ishan Kishan during National Anthem, got annoyed by a Bee.#INDvZIM pic.twitter.com/e1RNct2xj1

The next game will be played at the same venue on 20th August i.e. Saturday. Team India will look to win the series and then try out their young guns in the last game of the series. On the other hand, Zimbabwe will look to give a spirited performance against the daunting Indian team.