Watch: Jos Buttler goes outside pitch to hit a six on double-bounce ball against Netherlands 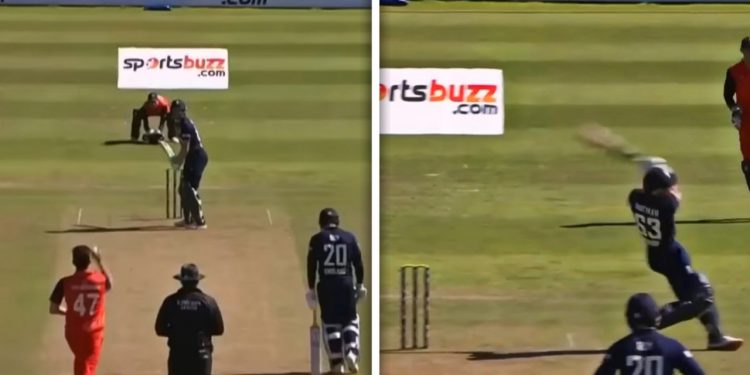 On Wednesday, England whitewashed the Netherlands in the 3-ODI match series. The Dutch side was completely dominated by Englishmen in all three games. In the very first ODI, England recorded the highest ever ODI total (498) with help of big centuries of Jos Buttler, Dawid Malan, and Phil Salt. While in yesterday’s match, they chased 244 in 30.1 overs with Jason Roy (101*) and Jos Buttler (86*)  being their highest scorer.

In 3rd ODI, Jos Buttler was stand-in captain as Eoin Morgan missed the game due to a tight groin. The keeper-batter promoted himself in the batting order to the no.4 position and he did well by scoring 86 off 64 balls. The 31-year-old batter hit 5 sixes during the knock and one of the sixes came on a double bounce ball.

England skipper made the best out of free-hit too as he hit another six straight over the bowler’s head. A total of 26 runs were scored in Meekeren’s over including 3 sixes. In the next over, Jos Buttler helped Jason Roy reach his century by giving him a strike. Once, Roy reached 101, Buttler was free to throw the bat and finished the game with a six.

The English Test side is too eying to whitewash New Zealand by 3-0. The 3rd test of the series is commencing from today at Headingley, Leeds. Following the series, the Joe Root-led side will be looking to avoid a Test series loss against India in the rescheduled match starting July 1. Currently, India are 2-1 up in the series. Both sides to also play T20I and ODI series of 3 matches each.