India and New Zealand are currently involved in a two-match Test series. 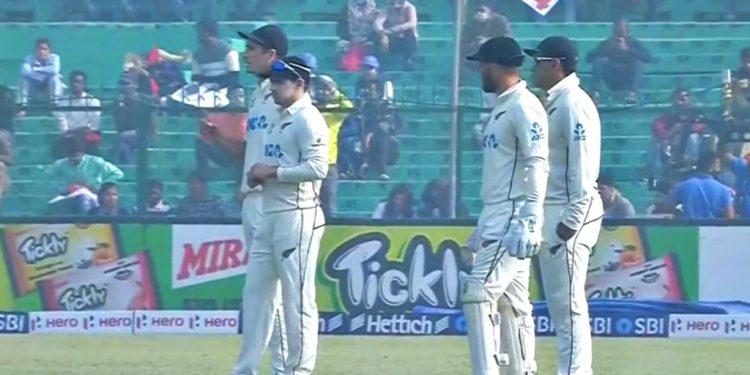 Thanks to the reducing number of coronavirus cases, the stadiums are again filled with the capacity crowd and the enthusiasm and excitement of fans can be seen. The India vs New Zealand T20 series saw fans in huge numbers filling the stadiums with their presence.

Day 1 of the ongoing Test match was no different as nearly 23,000 were seen cheering Team India at the Green Park stadium in Kanpur. India led by Ajinkya Rahane chose to bat first after winning the toss.

During the 6th over of the innings, a certain section of fans shouted slogans against India’s arch-rivals Pakistan. The video of the same incident is grabbing eyeballs on social media. At first, we can hear the chants of “Jeetega bhai Jeetega, India jeetega.” A fan then shouted “Pakistan Murdabad” as few others joined him a second later.

We know the history of two nations and their passion towards cricket. Both the countries have not been involved in a bilateral series since 2012 because of the political tensions.

India fights back after losing early wickets vs New Zealand

New Zealand punched above their weight in the first two sessions of the day. Courtesy of ferocious bowling of Kyle Jamieson combined with Tim Southee’s disciplined line and length, New Zealand were off to a great start as they rattled India’s top order. Barring Mayank Agarwal, every batsman got a start but could not make it big. Shubman Gill survived the new ball and scored vital 52 runs in testing conditions.

Debutant Shreyas Iyer partnered with Ravindra Jadeja to save the sinking ship. At the time of writing, the duo has added 70 runs for the 5th wicket with Shreyas batting on 54 runs and Jadeja on 29 runs.