Kaushal Tambe took a blinder as he sent well-set James Rew back to the dressing room. 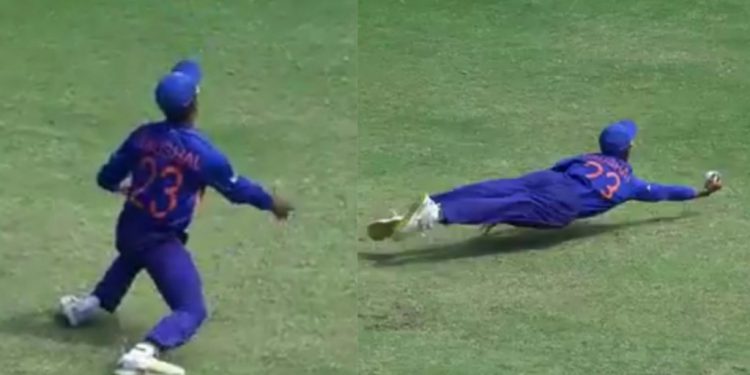 As India faced England in the finale of ICC U-19 Men’s World Cup 2022, their bowlers provided early breakthroughs with the opposition reeling at 91/7 at one stage. Raj Bawa and Ravi Kumar wreaked havoc on England as India seemed to cruise in the summit clash.

However, James Rew showed the nerves of steel and pulled back England from the crisis. Partnering with James Sales, Rew enforced pressure on the Indian bowlers.

England made a move on the path to comeback as their batters Rew and Sales started to dominate the proceedings. The two youngsters eased the pressure in the finale and aimed to set a good total for India to chase.

From 91/7, England’s U-19 boys took the score to 184/7 as India now felt the need to bring their star-performer Ravi Kumar back into the attack.

The pacer shone in the first delivery of the 44th over as he claimed the prized scalp of Rew, courtesy of a spectacular catch from Kaushal Tambe.

Pitching in a short-length delivery, Ravi forced Rew to go for the pull shot. The plan worked as the batter played the shot straight to the fielder.

Kaushal Tambe takes a stunner to break the 93-run stand

Tambe, however, almost made a mess of it as he failed to grab an easy catch in the first attempt and juggled the ball away from his body. But put in a full-strech dive and eventually managed to hold onto the ball in what turned out to be a marvellous catch.

Soon after, Englang were bowled out for 189. At the time of writing, India have already scored 70 runs at the loss of two wickets. With skipper Yash Dhull and in-form Shaik Rasheed at the crease, the team is well on their way to lift another U-19 World Cup trophy.