Watch: Marnus Labuschagne trips over and gets clean bowled in the weirdest way possible 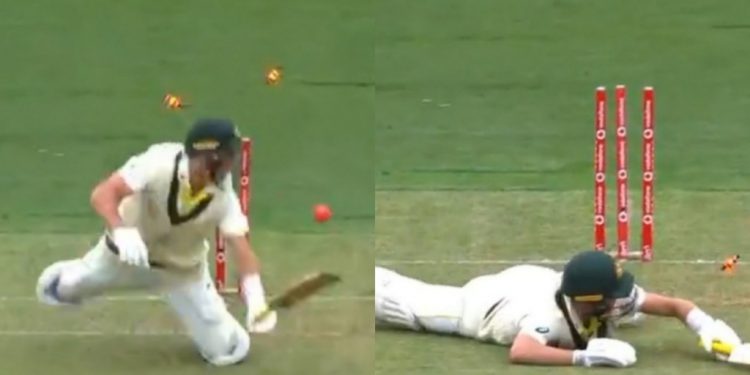 The final Test of the Ashes series between Australia and England went underway today and the England captain opted to bowl first after winning the toss. The English bowlers gave their team a wonderful start as they picked up three quick wickets. They had to wait for the fourth wicket and it came in a bizarre way as Marnus Labuschagne trips over and gets clean bowled.

The English bowlers jolted the Australian top-order as they claimed early wickets of Warner, Khawaja and Smith at the score of 12 only. The duo of Labuschagne and Head then notched-up a 71-run partnership to steady the ship for Australia. It was the seasoned campaigner Stuart Broad who finally broke the partnership. As he faced Broad, Marnus Labuschagne tripped over and got clean bowled as he got out in the most bizarre way.

Marnus Labuschagne trips and gets bowled

The wicket of Labuschagne came on the first delivery of the 23rd over of the Australian inning. However, the way Labuschagne got out surprised the cricket fans as it was quite an unusual way to go back to the pavilion. The Australian batsman tripped and got on all fours after his spikes slipped and consequentially, the Aussies lost their fourth wicket.

One of the weirdest dismissals we've ever seen! 😱#Ashes pic.twitter.com/8Qp5rKprn8

For the uninitiated, the Australian team has already won the Ashes series. They won the first 3 matches of the series and the fourth game was drawn with the help of England’s late resilience. The 2021-22 edition of the Ashes will end with the conclusion of the final Test which is being played at Bellerive Oval, Hobart.