Watch: New Zealand’s Will Young scores 7 runs in 1 ball without hitting a boundary

The confusion on the field by Bangladesh resulted in a gift of 7 runs to the Kiwi opener Will Young. 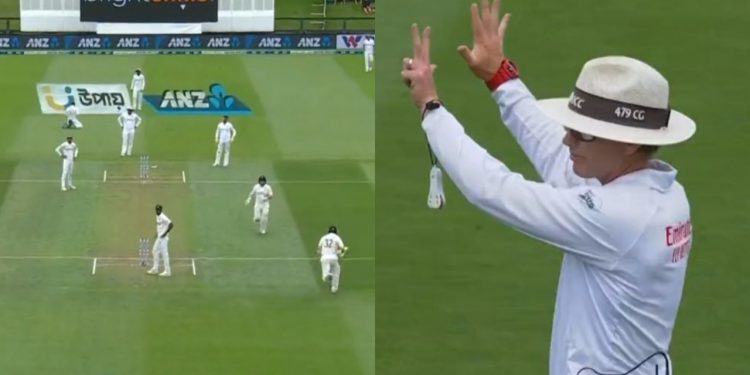 Team Bangladesh created history by winning the first Test against New Zealand in Bay Oval. It was a real shocker for the Kiwis as the loss ended their 17-match winning streak at home. The second Test match between the two teams got underway today and witnessed a comical moment where New Zealand’s Will Young scored 7 runs without even hitting a boundary.

Bangladesh skipper Mominul Haque went with the tried-and-tested formula of bowling first; however, it didn’t produce the same results like it did in the first Test. The New Zealand openers gave a brilliant start to their team adding 148 runs for the first wicket. In the process, Will Young surprisingly scored 7 runs on a delivery, all thanks to Bangladesh fielding.

The incident took place in the first over after lunch where chaos ensued and Will Young was gifted 7 runs. The star of the first match for Bangladesh Ebadot Hossain was bowling to Will Young when he nicked the last delivery of the over to the first slip. It looked like a straightforward catch for the man at the first slip, but the fielder at the second slip dived and changed the course of the ball with his intrusion.

Will Young was gifted 7 runs

Instead of a simple catch, the ball ran towards the boundary and Will Young with his partner was able to run 3. The keeper collected the ball and, in a bid, to run the Kiwi batsman out threw the ball at the bowler’s end, but no fielder could grab it. Ultimately the ball went to the boundary and the Kiwi team was gifted 7 runs on a single delivery.

Meanwhile, across the Tasman Sea… ⛴️

Chaos in the field for Bangladesh as Will Young scores a seven (yes, you read that correctly!) 😅#NZvBAN | BT Sport 3 HD pic.twitter.com/fvrD1xmNDd

After losing the first match, the Kiwis made a solid statement in the second Test as they scored a whopping 349 runs on the first day at the loss of only 1 wicket. Having lost only one wicket and scoring in excess of 300, the Kiwis have already gone way ahead in this match. Team Bangladesh will have to battle hard even if they want to save this match and clinch the series.