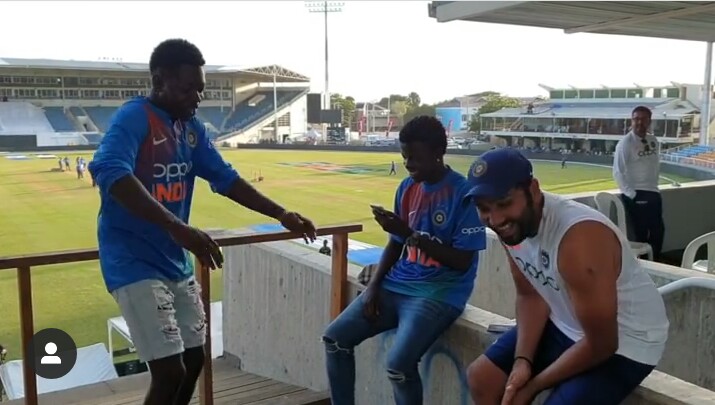 India has claimed a 2-0 series victory over West Indies on Monday. Meanwhile, Team India consolidate their position at the top of the ICC Test Championship Points Table. Team India registered a massive win of 257 runs in Kingston. After the win, Rohit Sharma enjoyed the moment with fans. However, he was not the part of Playing 11 in both the matches of series. On Monday, BCCI has shared a video of the veteran cricketer in which he is enjoying with his Jamaican Loyal Fans.

Meanwhile, the Board of Control for Cricket in India (BCCI) has shared the video with the caption, ” This is awesome from @ImRo45 when he randomly pulled out two of his loyal fans from the crowd in Jamaica #TeamIndia”.

This is awesome from @ImRo45 when he randomly pulled out two of his loyal fans from the crowd in Jamaica🕺🕺 #TeamIndia 😁👌👌 pic.twitter.com/PqRV1xtjgH

Now Team India will move back to India for their next series against South Africa. The series includes 3 T20Is and 3 Test Matches, going to start with the shortest format T20. The First Twenty-Twenty will be going to take place at Himachal Pradesh Cricket Stadium (HPCA), Dharamshala on 15th September. Before this India and South Africa had played one T20I match at Dharamshala, in which South Africa defeated Indian Team.

MUST WATCH: Viswanath Played The MS Dhoni Helicopter Shot A Way In 1979

After Dharamshala teams will move to Mohali for the second Twenty-Twenty of the series. And then the 3rd and final match of the series will be going to take place in Banglore.

India vs South Africa Test Series will start from 2 October 2019 at Vishakhapatnam.