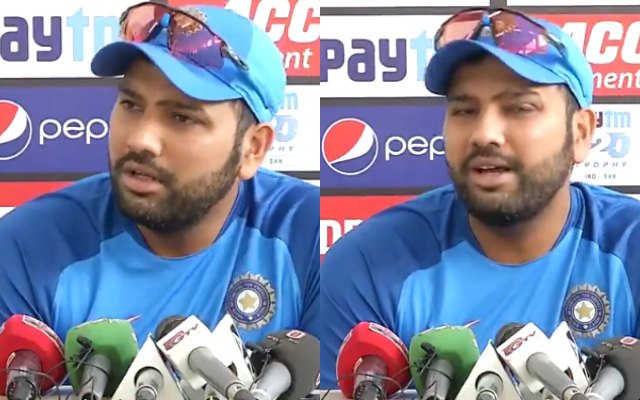 During the match, Team India made plenty of mistakes so they had to face the loss. There were a couple of LBW calls against Mushfiqur Rahim which they didn’t review (ball-tracking showed three reds for both). Krunal Pandya dropped a crucial catch in the 18th over which turned the game and momentum on its head. Moreover, India has missed its depth over specialist ‘Jasprit Bumrah’ as Khaleel Ahmed couldn’t hold the pressure in the 19th over.

And now the second T20 of the series has been scheduled on November 7 at Saurashtra Cricket Association Stadium in Rajkot. Ahead of the match Team India captain Rohit Sharma has faced the media on the eve of the second T20. Meanwhile, Rohit gets furious over a Journalist for not keeping his phone on silent mode. This is not the first time that Rohit Sharma is getting furious over Journalist in the press conference.

Sharma was trying to explain how the ‘Men in Blue’ are trying new players and how the key players are rested. At the same moment, a phone rang up and the captain said, “Please keep your phone on the silent boss”. Thereafter he explained about Team India’s planning about new players.

When Rohit lost his train of thought 📵 #INDvBAN pic.twitter.com/IAfh6WLSZH