Watch: Shaheen Afridi hurts Bangladeshi batter with his ferocious throw after being hit for a six

The batter was left wincing in pain as Shaheen rushed to check on him. 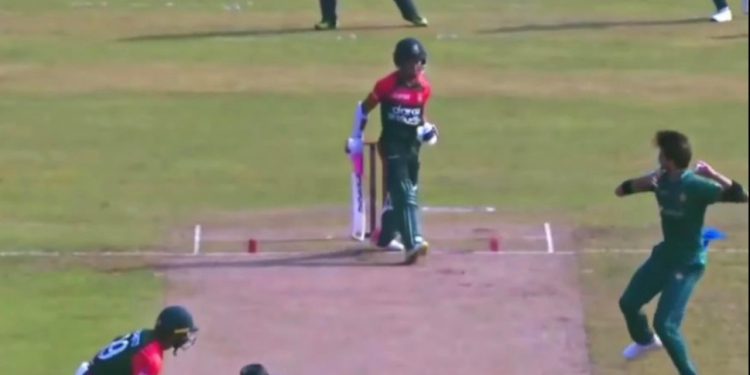 Pakistan and Bangladesh were scheduled to play three twenty-twenty internationals between November 19 and November 22. The first match of the three-match-long T20 int’l series was played on Friday. It was a nail-biter but eventually, Pakistan had come out top.

Henceforth, when both the sides met for their second game yesterday, stakes were raised for Bangladesh. Therefore, both intent and match-intensity were expected to be sky-high.

Turns out they actually were, from both the sides. Mahumudullah won the toss yet again. He elected to bat first, yet again. And while the first two overs were quite and didn’t carry much action, the players flipped the switch in the third over.

Afif Hossain had just walked out at four following Naim’s dismissal and boy, he came out with proper intent. Left-armer Shaheen Shah came steaming in with the cherry in his hand and dished Hossain a full-length ball. Hossain flicked it high and handsome. The hit yielded him a first-ball six. However, Shaheen wasn’t very pleased at it. He was flummoxed.

He decided he had had enough when Hossain casually defended his next delivery. Post gathering the ball in his follow-through, Shaheen pelted it right back at Afif Hossain. It hit Hossain on his ankle and wincing in pain, he fell onto the batting crease. Here’s the clip.

Pakistan Bowler, shaheen afridi injures Bangladeshi batsman by throwing ball at him after getting hit for a six on previous delivery. pic.twitter.com/shEuzVMGYx

In Shaheen’s defense though, he was just actually aiming for the stumps and Hossain happened to cover them. Nonetheless, the left-armer realised his mistake soon enough and immediately apologized by raising his hands. Then he walked to the batter and patted him on the back of his helmet, playing down any harsh feelings.

How did the Shaheen and Afif fare in the match?

In short, Shaheen Shah out-did Hossain. Hossain was involved in a 46-run-long recovery stand and made 20 runs for himself. However, Shaheen Shah was class-apart and swung it both ways. His 2 for 15 turned out to be the best bowling figures from the night

Pakistan won the match and attained an unassailable 2-0 lead, owing to Fakhar’s unbeaten 57 from paired with the twin strike from Shaheen Afridi.