Watch: Suryakumar Yadav stuns fans as he pulls off an outrageous upper cut 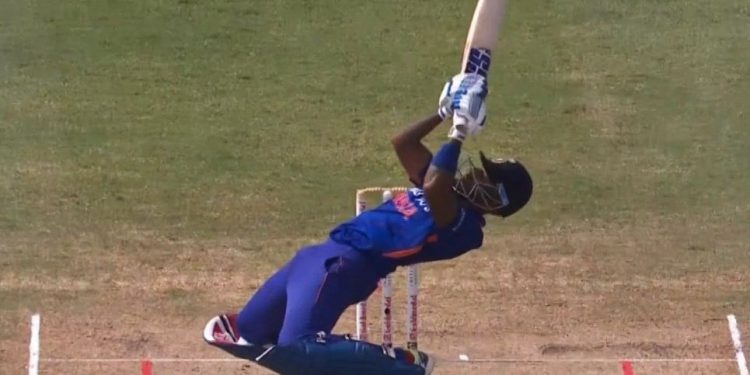 Team India came back to winning ways in the third T20I after their one-off defeat against West Indies in the second match of the series. The Indian batsmen were clinical in their performance and finished the game with one over left. Suryakumar Yadav was in his element and played some really good shots in the chase and during the process, Suryakumar Yadav stuns fans with his outrageous uppercut.

After losing the second game, team India bounced back in the third T20I as they trumped West Indies with quite ease. Rohit Sharma opted to bowl first after winning the toss and the Windies batsmen notched up a competitive score of 164 in their 20 overs. Coming as an opener, Suryakumar Yadav stuns fans during his inning by playing a completely astonishing uppercut.

The brilliant show of athleticism by Suryakumar came in the 10th over of the Indian inning which was bowled by Alzarri Joseph. SKY uses his wrists a lot while playing the shots and more often than not, he plays shots that look completely baffling. One of these shots was on display on the last delivery of the tenth over as Suryakumar Yadav stuns fans with his flexibility.

How good was that shot from @surya_14kumar? Let us know in the comments.

The last delivery of the over by Joseph was a short ball to which SKY arched back, let the ball pass and then stuck his bat up to ramp the ball. The batsman played the shot with such finesse that the fans and the commentators were left amazed. Suryakumar Yadav stuns fans with his amazing batting in the third game and went on to score a match-winning 76 runs.

The Indian batsmen made light work of the chase as they went all guns blazing and deflated the Windies’ bowling. With the victory, India is leading the 5-match series by 2-1 with two more matches to go. The fourth match of the series will be played on 06th August and will be followed by the last game on the next day.