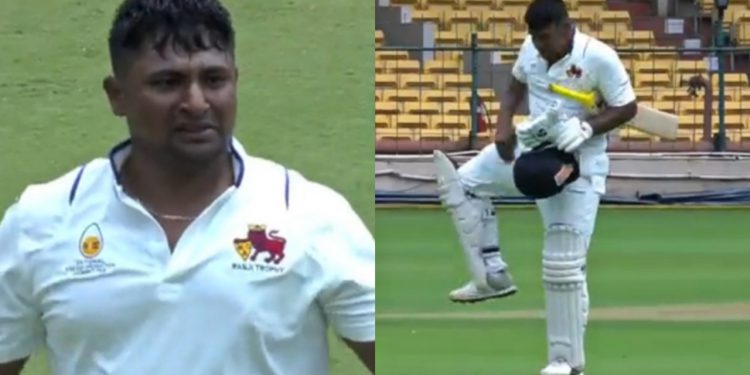 It sent chills down the spines of the fans when the news of the assassination of the famous Punjabi singer Sidhu Moose Wala broke. The 29-year-old singer was shot down by unidentified assailants on 29th May this year in Mansa district. The singer was loved by many across the globe and Ranji star Sarfaraz Khan gives tribute to the late singer after hitting a century in the all-important Ranji Trophy Final on Thursday.

Sidhu Moose Wala’s tragic demise came as an utter shock for his fans and followers who loved his music ardently. Sarfaraz Khan, who has been in scintillating form in the 2021-22 edition of the Ranji Trophy got emotional after hitting his fourth century of the season. The batsman was elated as he reached the landmark and was seen shouting cheerfully. While he was celebrating his hundred, the batsman gave tribute to late singer Sidhu Moose Wala.

Sarfaraz Khan represented Delhi Capitals in the 15th edition of the Indian Premier League but couldn’t really work his magic except for an inning or two. However, the batsman has been in red-hot form and has grabbed the attention of everyone with his brilliant display of batting in the ongoing Ranji Trophy. He continued with his amazing form in the Final of the Ranji Trophy as he scored 134 runs for his team.

This has been a superb knock in the all-important summit clash. 👌 👌 #Final | #MPvMUM | @MumbaiCricAssoc

The batsman came in at No.5 and carried on with the magical form he is in. Sarfaraz Khan batted fluently and supported his team with a century and was the last batsman to get out for Mumbai. After he reached his century, the cricketer was jubilant and gave an emotional tribute to Sidhu Moose Wala with the singer’s signature gesture. The batsman was teary-eyed while he was celebrating and giving tribute to the singer. The video of the same has gone viral and the netizens are applauding Sarfaraz’s gesture toward the late singer.