Dhawan could not get his hands on the ball at all but managed to clinch it between his thighs by accident. 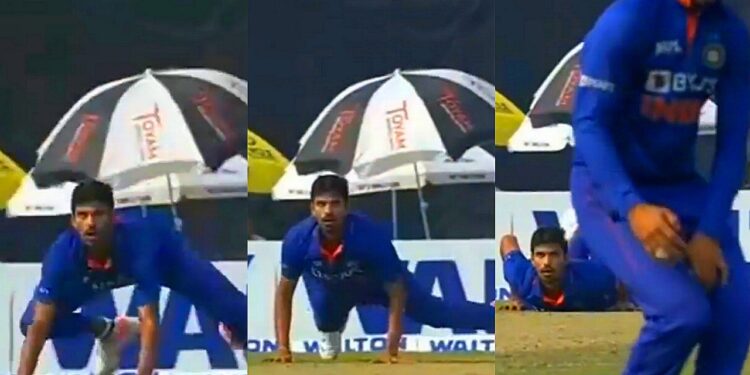 Off-spin allrounder Washington Sundar again put on a show with the ball in hand as he took 3 wickets for just 37 runs off his disciplined 10-over spell.

However, more than his bowling heroics, Sundar made headlines due to a hilarious reaction that he gave to Shikhar Dhawan almost dropping an easy-peasy catch.

It was the last ball of the 17th over when Shakib al-Hasan top-edged his attempted sweep off Team India spinner Washington Sundar.

The ball ballooned off his blade and went to Shikhar Dhawan at short fine-leg. However, what was a straightforward chance turned into a comical incident after Mohammed Siraj came rushing in from short third man to claim the catch.

Seeing the duo almost collide, Sundar appeared nervous about his wicket going to trash and lay on the ground with a nervous and hilarious reaction. Dhawan didn’t manage to get his hands on the ball but regardless, caught it by accident as it got stuck between his thighs.

The reaction from Washington Sundar was a priceless one, and it won’t be surprising if it goes on to become a famous meme template like King Kohli’s tongue-out celebration.

Coming back to the match, Washington Sundar had a great outing as in his very next over after the aforementioned incident, the bowler sent Mushfiqur Rahim and Afif Hossain packing off consecutive deliveries.

Sundar’s twin-strike in the 19th over reduced Bangladesh to 6 for 69 and the Men in Blue looked set to limit the hosts under 150.

However, a record-breaking 148-run stand for the seventh wicket followed as Mahmudullah (77 off 85) and Mehidy Hasan Miraz (100* off 83) refused to let the bowlers back into the game.

Thanks to the duo and a late cameo from Nassum, Bangladesh managed to put 271 runs on the board– a total that Team India fell short of by 5 runs despite great knocks from Shreyas Iyer (82) and an injured Rohit Sharma (51 not-out).