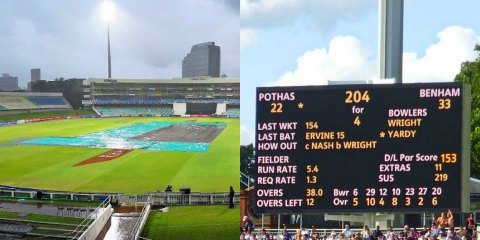 An uninterrupted, action-packed game of cricket is what most fans crave. Sadly, though, that’s an expectation that doesn’t get met all the time. Uncontrollable external factors like rain and poor weather conditions often end up having a bearing on the overall game situation; which, consequently, opens up a window of opportunity for several hypothesis-based score prediction systems. The V Jayadevan method- or the more popular abbreviation, VJD- happens to be one such method. But what exactly is the VJD method in cricket?

Pioneered in 1998 by a Kerala-based civil engineer V Jayadevan, the VJD method aimed at resolving scoring discrepancies in rain-marred limited-overs matches. It was used in competitive cricket matches like the now-defunct Indian Cricket League (ICL); until as recently as 2012, when the International Cricket Council (ICC) officially deemed it as a poorer alternative to the Duckworth-Lewis-Sterne (DLS) metric. Despite that, VJD continues to find usage in some semi-domestic competitive tournaments like the Tamil Nadu Premier League (TNPL). But getting back to the original question: what is VJD, and how does it work?

Well, the VJD method has several fundamental differences from the incumbently popular DLS scoring system. For starters, VJD calculation takes into account how a particular team performed in its previous completed games. Essentially, it divides an innings into 7 smaller phases for the ease of mathematical calculations.

The approach employed is based on the assumption that the batting team scores at a higher run-rate in the powerplay phase- owing to fielding restrictions. The middle over period that follows sees a decline in the scoring rate, as batters try to stabilize the innings. Finally, the ‘death’ phase of the game sees another period of increased run-scoring, owing to the ‘nothing to lose’ mentality most teams adopt at this particular stage of the innings.

One advantage of the VJD method over DLS is its better accuracy and mathematical precision. VJD, as opposed to DLS, bases its calculations on two separate run-curves as opposed to a single one. Thus, with the increased data size, there’s a visible improvement in the data outputs available. Besides, this also accounts for the renewed approach a team shows in its batting once the number of overs is reduced.

Here’s a comparison of two different batting approaches under the VJD and DLS schematics in a 20-over match:

So with all the aforementioned advantages of the system, there must be some big deterrents that stop it from being implemented. One of the most obvious ones is that it hardlines a team’s batting (or bowling approach) based on existing data, which might not necessarily be accurate in every given situation. In fact, back in 2012, when the ICC officially renounced VJD from being used in any professional-level competitive game, their reasoning was that “The committee unanimously agreed that there was no evidence of any significant flaws in the D/L method. Nor did the committee believe that any improvements could be offered by the VJD method.”