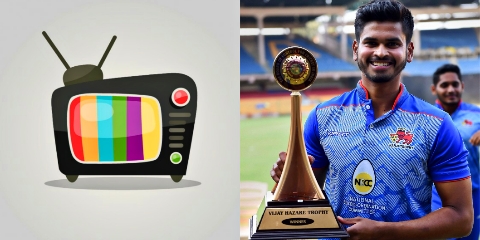 The biggest domestic one-day cricket competition of India Vijay Hazare Trophy commences on 20 February. A total of 103 matches to be played in the 2021 edition of the trophy while 38 teams are participating. The final match will take place on 14 March. Fans are eager to know where to watch Vijay Hazare Trophy live on TV. Here we will let you know all the available options to watch the telecast of all matches.

Currently, Star India is holding all the cricket rights from BCCI. Only Star network can telecast all the matches in India that are under BCCI. The company has rights to show IPL, India series, Syed Mushtaq Ali Trophy, Ranji Trophy and Vijay Hazare Trophy. So you can watch Vijay Hazare Trophy live on TV on the following channels; Star Sports 2 and Star Sports 2 HD. However, the channels will not telecast all the matches.

The competition’s streaming is also available. Users can watch one-day matches of the domestic tournaments on Disney+Hotstar app. Vijay Hazare Trophy 2021 to be played in 6 different venues. However, during the league stage, only 1 or 2 venues’ matches will be telecasted live.

BCCI has selected 6 venues for the league stage; Surat, Indore, Bangalore, Jaipur, Kolkata and Chennai. The board has not yet decided the venues for the Knock-out matches. The matches will start either at 8:45 AM or 9:00 AM, so there will no day-night match. The trophy is ending on 14 March and it will be good preparation for players before IPL 2021.

In Vijay Hazare Trophy 2021, 38 teams are divided into 6 groups including the plate group. After 103 matches, 8 teams will qualify for the knock-out stage. Initially, Ranji Trophy had to be played before the domestic one-day competition. However, arranging a long first-class season in 2021 was out of BCCI’s hands.