Fans believe that Labuschagne's reply lacked 'respect' for the greatness of Tendulkar. 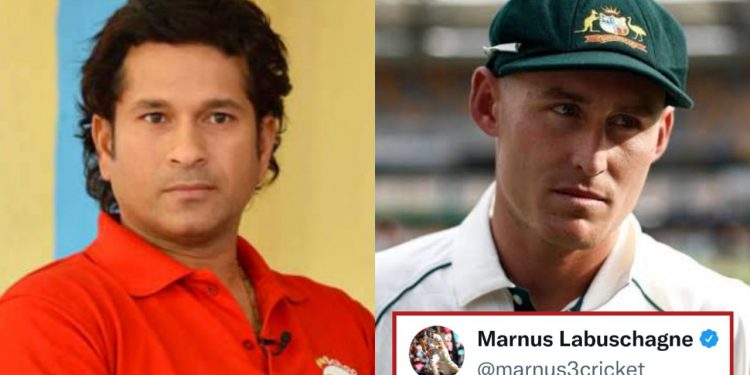 Marnus Labuschagne is rather active on Twitter for a full-time cricketer. Few days ago, the aussie shared a clip of him playing campsite cricket with his family and a pet-dog that garnered a lot of love from fans across the world.

However, a more recent activity from Marnus has landed him in hot waters.

The Women’s Cricket Tournament of 2022 Commonwealth Games got underway a day before with Australia and India clashing in the opener. Cricket made a comeback on the Commonwealth stage after 1988.

Hours prior to it, Indian former-cricketer and arguably the greatest batsman in the history of the game, Sachin Tendulkar took to Twitter to share a good-luck message for the Indian Women Cricket Team while also expressing his elation at cricket’s return to the Commonwealths.

“Wonderful to see cricket back in the Commonwealth Games. Hope this takes our beautiful game to newer audiences. Best wishes to @BCCIWomen’s team for their CWG22 campaign.”

Wonderful to see cricket back in the Commonwealth Games.
Hope this takes our beautiful game to newer audiences. Best wishes to @BCCIWomen’s team for their #CWG22 campaign.

Marnus Labuschagne soon replied to the same by writing, “Agreed Sachin. Aus v (versus) India is going to be an amazing opener too.”

Agreed Sachin. Aus v India is going to be an amazing opener too 👏🏼

The first two words of Marnus’ tweet, as it turned out, have proved enough to trigger some Indian cricket fans.

They believe that Labuschagne’s reply lacked ‘respect’ for the greatness of Tendulkar as in the tweet, the Kangaroo sensation doesn’t append the word ‘sir’ to Sachin’s name.

Several discontent fans have slammed Marnus Labuschagne since then. One of the users has reminded the right-hander of how he must have been a baby when Sachin Tendulkar (in his prime) used to play.

“You were in your nappies Labuschagne when he made his debut atleast give him some respect,” the most brutal of the tweets reads.

You were in your nappies labuschagne when he made his debut atleast give him some respect.

Mr. No run you can say Sachin sir not just Sachin ok

Sachin? No Indian players talk to him like this. Show some respects

Mr. marnus, Sachin is almost double ur age. And his records tripple of yours. Have some respect while taking name.

Users are pointing out how ‘Sir’ Sachin Tendulkar, being elder to Labuschagne should automatically command his respect.

However, my take on the subject differs from these users. Respect is subjective.

Moreover, demanding respect for one cricketer by bombardment of demeaning comments on another is extremely hypocritical.

Putting a three-lettered word ahead of someone’s name doesn’t really translate to the existence of real respect. Nor does not using it translate to a lack of it.

Marnus still watches Master Blaster’s old footage and considers his technique ‘unbelievable’. If that isn’t respect for the Indian maestro, I do not know what is.

Regardless, Marnus could have just replied to the tweet by addressing Sachin Tendulkar as ‘sir’. The controversy won’t even have existed and you sirs and madams wouldn’t have been reading this.