Stubbs was sold for a staggering amount of R 9.20 million while the likes of Shamsi, Russouw and Klaasen also got a substantial paycheck. 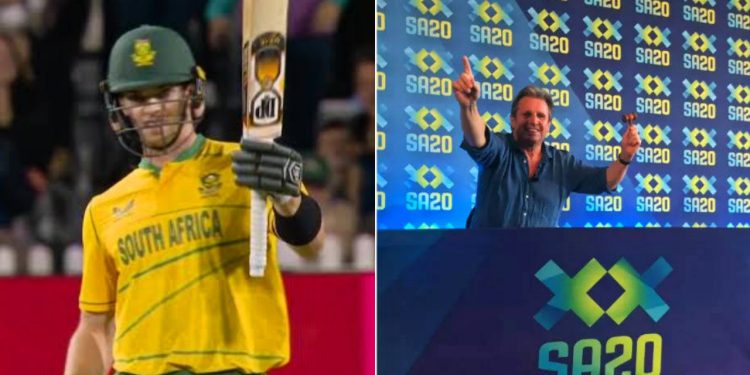 Cricket South Africa’s own T20 League (the SA20) going to be held in the months of January and February 2023 and the auction for it was held on September 19.

The franchises were allowed to sign upto 5 players each (including one from South Africa) before yesterday’s auction process got off the mark.

Incidentally, the 6 franchises that took place in the auction are all owned by one or another IPL franchise.

During the auction, 553 players went under the hammer and 102 were successfully sold: In this space, ST247 covers 10 of the Most Expensive picks from the SA20 auction.

The readers may not have known the name of this brute of a batsman from the Republic of South Africa. However, the participant franchises did.

In the last few months, Tristan Stubbs has made a huge name for himself in the T20 circuit– smashing 293 runs in 2022 CSA T20 challenge and then following it up with a productive The Hundred 2022.

The never-ending bidding war between MI Cape Town, Sunrisers Eastern Cape and Jo’burg Super Kings was eventually won by the Sunrisers– who bagged the services of Tristan Stubbs in the SA20 auction for a staggering amount of Rand 9.2 million (4.1 crore).

Undoubtedly, Russouw has been one of the best number 3 and 4 batsmen in the T20 leagues all across the globe.

Scrapping of Kolpak made Russouw eligible to play for South Africa again and the left-hander made a comeback to int’l team not long ago.

Marco Jansen showed glimpses of the returns his good-length bowling could offer in the 2022 edition of the IPL.

Subsequently, he also impressed against the Root, Bairstow and co. in the recently played Test series against England.

One more ex-Kolpak player who has returned to the South Africa setup is the 33-year-old bowling all-rounder named Wayne Parnell.

The left-arm seamer who already has 236 T20 scalps to his name went to Pretoria Capitals (owned by Delhi Capitals) at a price for Rand 5.6 million i.e. INR 2.50 crore.

Magala has only played a couple of matches for the South African team at an international level but was one of the better local bowlers available in the SA20 auction.

Klaasen smacking Chahal to all parks of the ground is a sight no cricket fan from South Africa or India can forget.

In recent times, the wicket-keeper batter has done well in only patches. However, the match-winning ability that he owns was enough to force Paarl Royals to pay upwards of 2 crore to acquire him.

Hendricks hasn’t played in IPL, BBL, or even the PSL. Nonetheless, that doesn’t change the fact that he is one of the most consistent Limited-overs opener for SA.

The batter has more than 1300 runs for SA in T20 internationals.

The left-arm unorthodox spin of Shamsi has been a thing of extreme importance to Cricket South Africa in the last five years.

Tabrazi Shamsi has taken 69 T20I wickets from 56 games at an economy of 7 and was expected to be one of the most expensive buys in the SA20 auction.

Rather low on the list for the reputation that he has built. But one of the Top 10 bids of the SA20 league regardless.

Dwayne Pretorious –a gun death bowler who can double down as a big-hitter– went to Durban Super Giants for 1 crore.

RVD has been a late bloomer by the standards of int’l cricket. However, the batsman, 33, has made the most of the opportunities he has got in international shirt for RSA.

Dussen rounds off the list featuring 10 Most Expensive players from the inaugural SA20 auction and was sold to MI Cape Town for 1 crore near-abouts.

The batter has often bailed his side out of trouble in recent times, averaging 70 in ODIs & 36 in T20Is. Surely, RVD is going to offer ruge Return-on-Investment compared to some players higher up the list.

The other stars to walk out with a good contract include Morgan, Neesham, Phil Salt and Malan (Janeman, not Dawid).