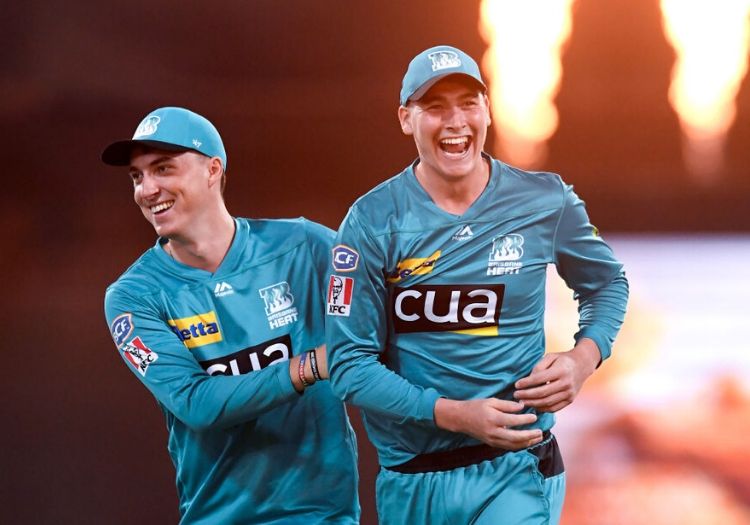 The ongoing season of Australia’s Big Bash League has witnessed its fair share of breath-taking catches. Talk about Chris Jordan’s gravity defying moment of brilliance against the Melbourne Renegades. Or how amazingly Ben Dunk and Nathan Coulter-Nile collaborated to castle Shaun Marsh at the Melbourne derby. Apparently, the BBL hasn’t yet seen all of them, as Brisbane Heat added to that list with their spectacular relay effort in their clash today against the Hobart Hurricanes.

Hobart skipper Matthew Wade was holding one-end steady with a defiant half-century. If the pressure of captaincy in his season’s debut match wasn’t enough, the constant fall of wickets at the other end only exacerbated his job. All he could do was target the lackluster deliveries for boundaries, of which there weren’t that many. Thankfully, Ben Cutting delivered one such ball in the 15th over’s penultimate ball. Wade slogged that ball high towards long-on, confident that he could clear the fielders.

And that he almost did, except Matt Renshaw ran in just in time to soil his plans. Renshaw parried away the ball with his hands, but the recoil pushed him out of the boundary rope. Before the ball could drop, Renshaw jumped; all this while outside of the boundary rope; and jabbed the ball at Tom Banton, who had come in to complete the relay. Banton deftly collected the ball, and the Heat players started to celebrate, confident that they had claimed their wicket.

But it took quite some time before the umpires could come to a decision. What made the call a tough one was a recent change in the laws of the game. The law 19.5, pertaining to such scenarios, now states that airborne-fielders must have made their first contact with the ball inside the field. Also, earlier, any contact with the ball outside of the boundary-rope would’ve resulted in a boundary, but under the new changes, if a fielder is air-borne, then the decision will go in their favor. Ultimately, the consulted third-umpire changed his original verdict of “not-out” to “out”, after carefully going through the changes. Wade walked back without much argument. Here’s the video of the controversial catch-in-question:

Out or not out?

Some outstanding work by (and beyond) the boundary line from Matt Renshaw! 😲#BBL09pic.twitter.com/MdR0Ot7KMp

The Twitterati, though, refused to take the decision in all black and white, and had a mixed-reaction over the decision. Notably, New Zealand all-rounder James Neesham, who has quite the reputation of engaging in social-media banters, came out criticizing the decision and the rule change. Here are some of the popular comments:

There's a lot of Somerset County Cricket Club in this clip! 👊

Yep that’s what the rule always was, and it’s obviously the correct way.

CAN YOU JUST BELIEVE THIS CATCH? 😲

The ball went over the ropes, but Matt Renshaw, somehow, manages to pull it back for Tom Banton 🙌

Both the fielder and the ball were over the ropes when the act was initiated. Should this rule be changed❓👀#BBL09pic.twitter.com/U5TKhKMyov

That was rightly given OUT, as per this recent rule change#BBL09 pic.twitter.com/Pg4f00GuoS

Talking about the match, Wade’s gritty innings (61 off 46, 3 x 4, 2 x 6) could only help his team so much as they ultimately finished at 126/9. In reply, the hosts started-off strong with Tom Banton and Max Bryant collecting boundaries on a regular basis, but pacer Scott Boland proved to be a major stumbling block as he notched up 3 quick wickets. The game was still on an iffy state, with the Heat languishing at 71/5 at the halfway mark, before Ben Cutting and ‘keeper Jimmy Peirson combined forces to polish-off the chase without further trouble. With the win, hosts climbed to the third spot on the points table. Hurricanes, meanwhile, are languishing at the 7th spot.